"The key of history is not in history, he is in man," says Théodore Simon Jouffroy.

It is the same for DRÜCKER Steuerungssystemes: Without the people behind it, the company would not be where it is today. 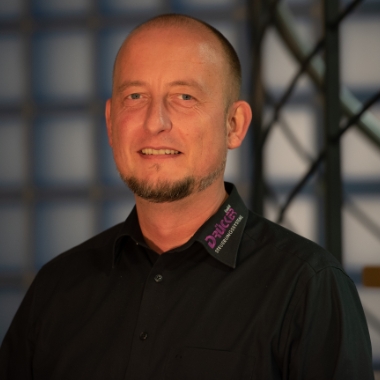 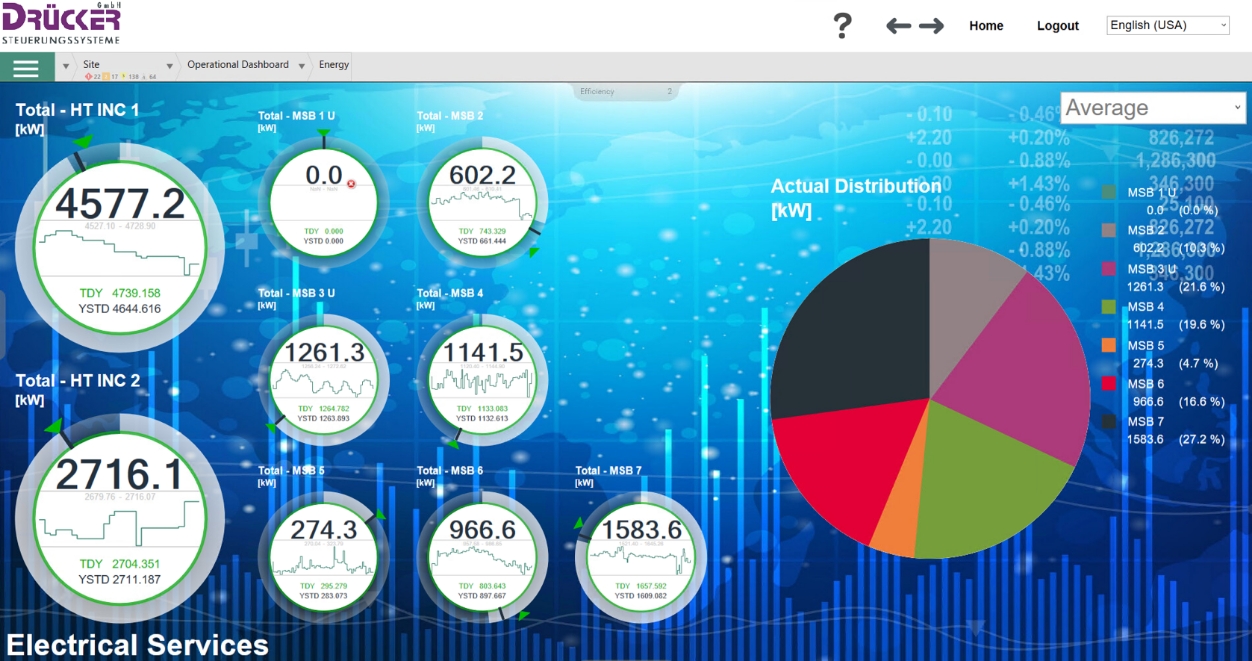 Transition to the new vehicle fleet 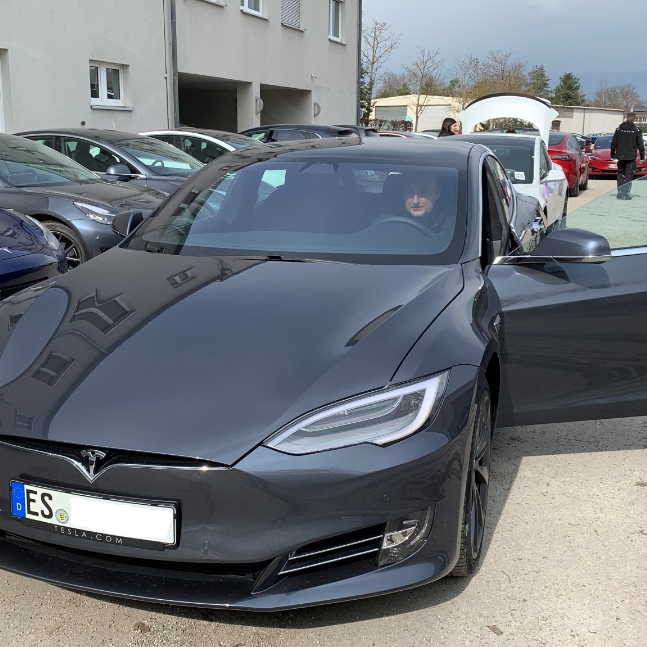 DRÜCKER is among the world's best 15 partners of Wonderware 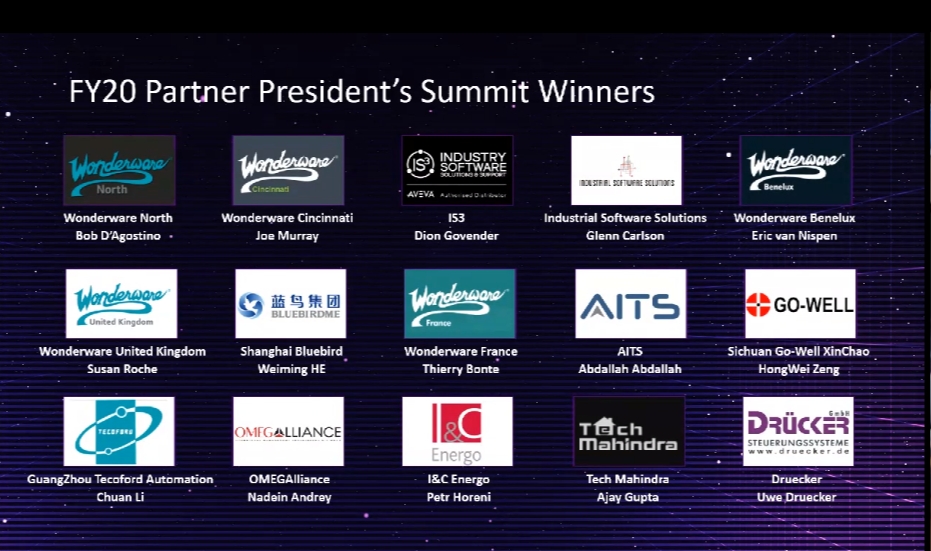 30. SPS Messe (PLC fair) Nuremberg - Drücker as a partner on the Wonderware stand 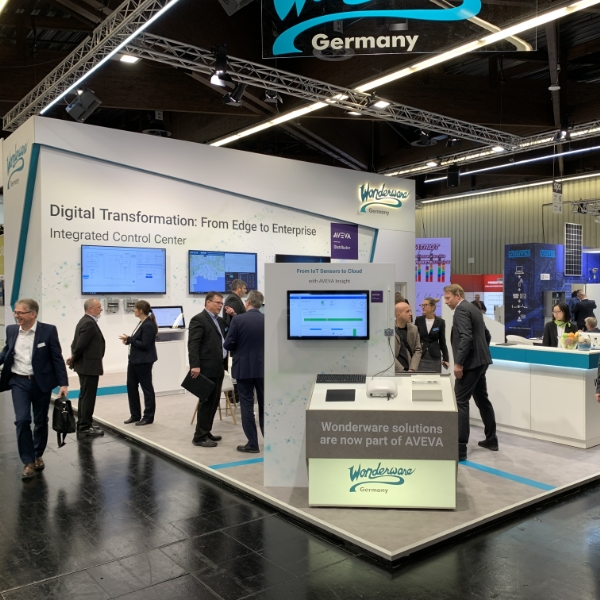 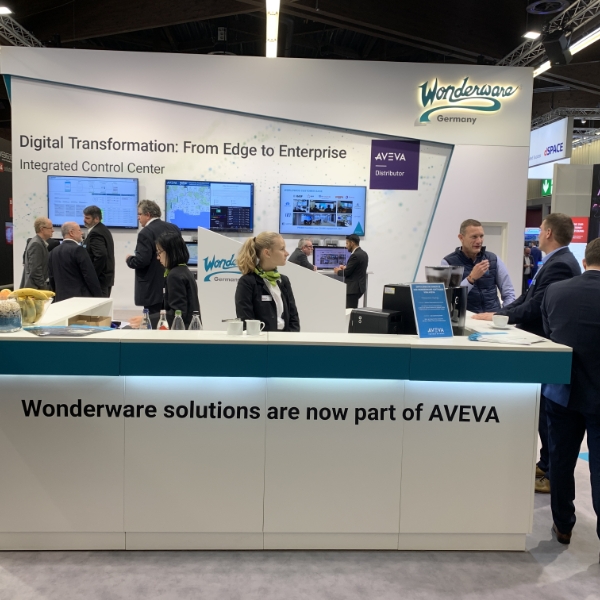 In September 2018, the second generation of the Drücker family entered the company. 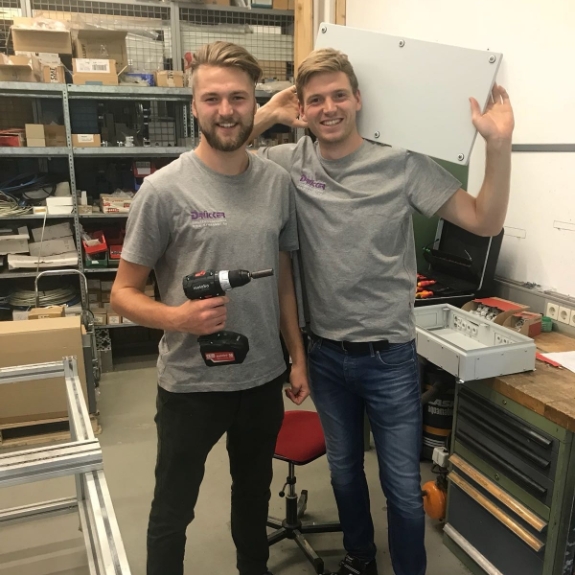 Membership of the Erfa-Kreis Industrie 4.0 of the IHK Stuttgart

Appointment to the certified distribution partner of WIN-911 for Germany

WIN-911 is one of the leading providers for a comprehensive real-time alarm display system for Wonderware applications.

Win-911 Enterprise Edition can easily be integrated into your existing SCADA system to monitor alarm states and offers a display function equipped with rich functions using the latest technology. 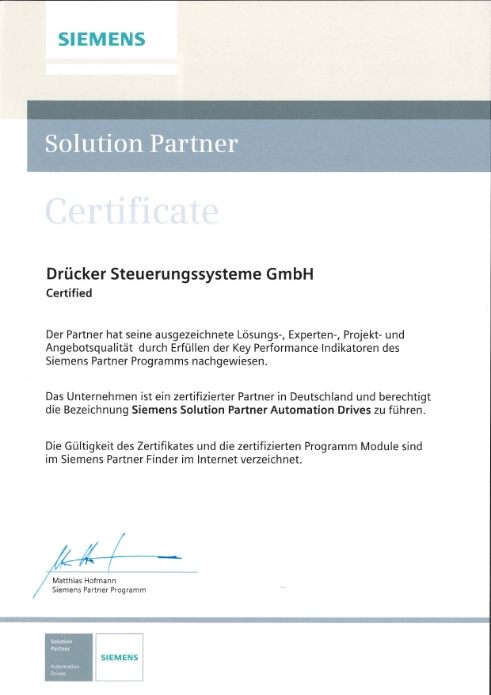 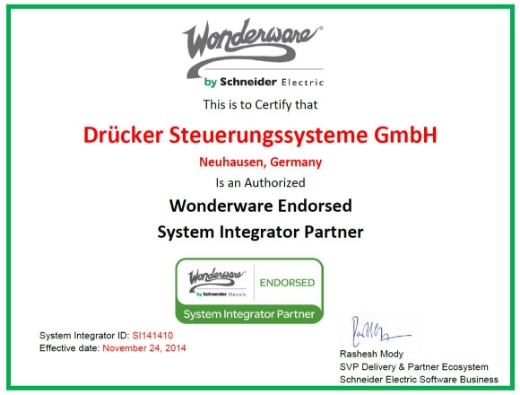 In May 2010, the 25th anniversary of the company Drücker Steuerungssysteme GmbH was celebrated. 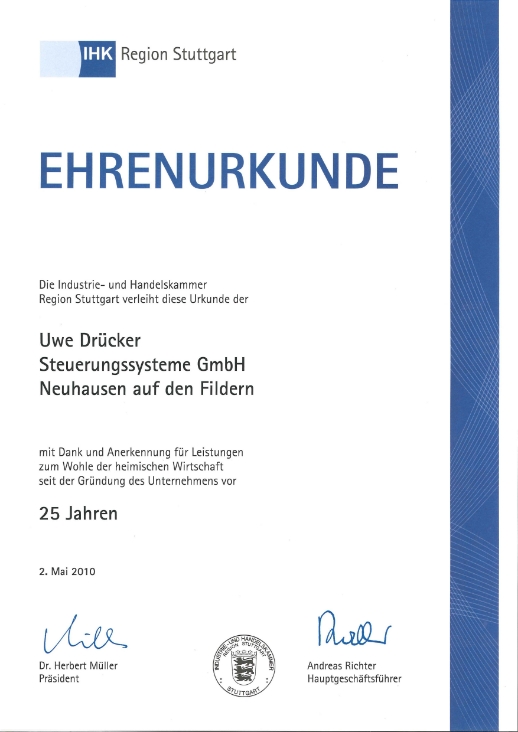 The IT solutions division is sold

Moving in the new building

In 2002, the second new building in the Albstrasse 10 was moved into. There are now 1.500sqm workshop and office space available. 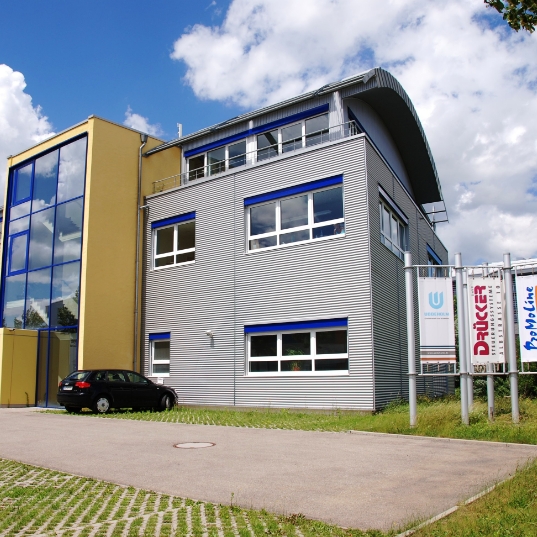 Uwe Drücker has developed a globally unique device: "STEPtoWEB" connects the machines in the production hall with communication technology in the office and thus significantly increases the availability of the machines.

The Innovation Award of the Volksbanken Raiffeisenbanken is endowed with € 25,000. 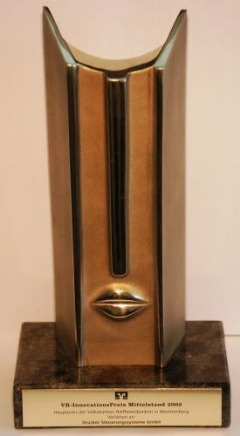 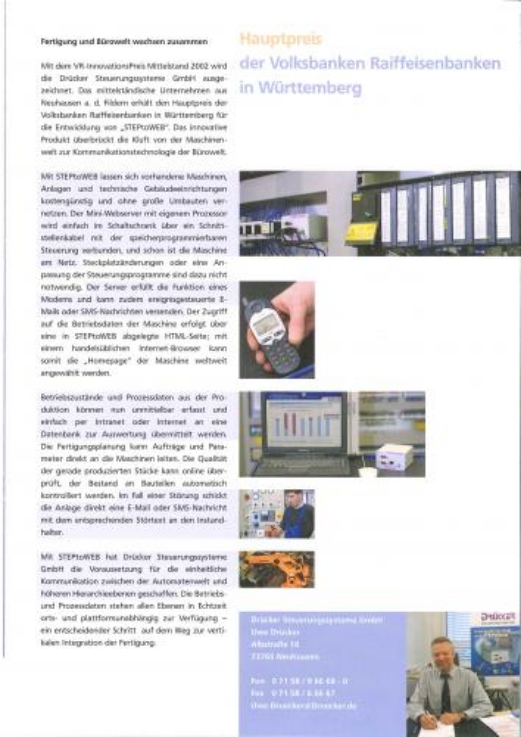 The first STEPtoWEB box is ready

For the first time, STEPtoWEB allows connecting machine controls with the internet via the programming unit interface. 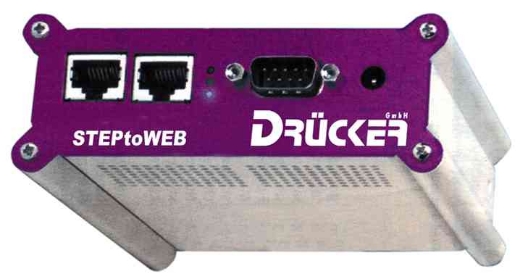 Certification according to ISO 9001

In 1998, the company Drücker control systems became one of the first Siemens Solution Provider for industrial automation. 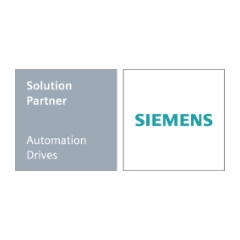 Foundation of the IT solutions division

In the industry, the still quite young operating system Windows from Microsoft is becoming increasingly important. In order to be able to use this technology faster and better with our customers, the IT solutions division was formed.

With the company KHK, a partnership has been agreed upon, and a modern Windows-based merchandise management system could be offered. The first customers have been acquired and the employee base expanded.

In May 1995, a partnership with ICT-Wonderware was established. The company Drücker became of of the first system integrators in southern Germany. The first projects with the visualization software InTouch on Windows 3.11 were created.

Moving in the new building 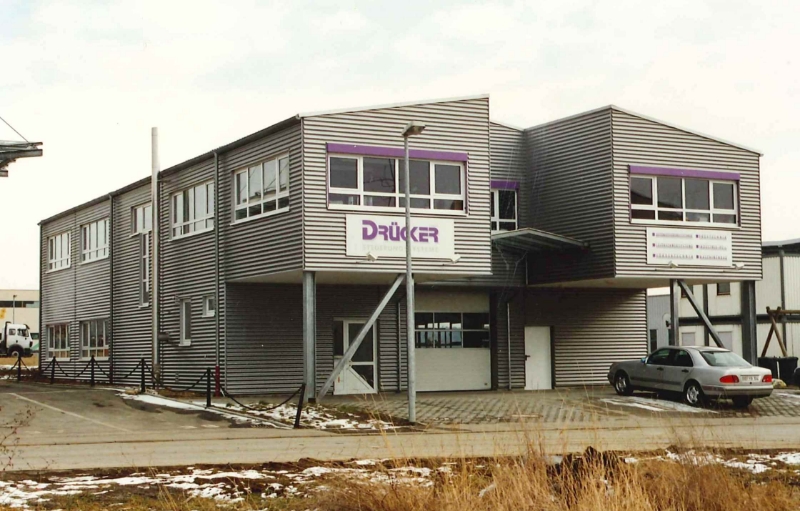 The first company brochure is ready

In cooperation with the graphics studio Lang, an image brochure was created. It was distributed to customers and trade fairs. 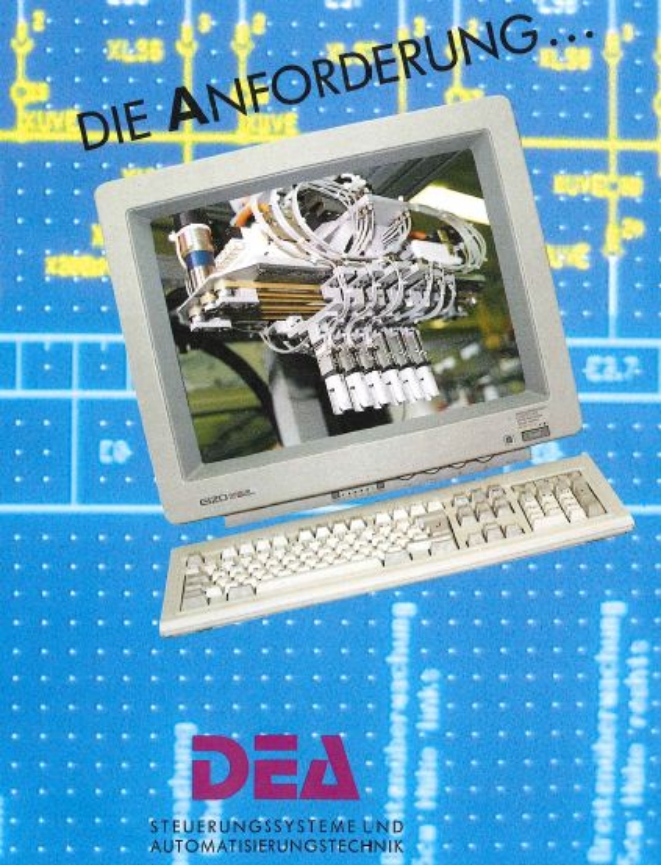 The first control for a fully automated parking system has been developed for a project in Heidelberg. 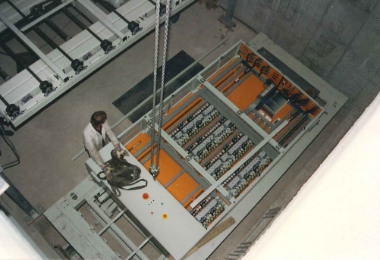 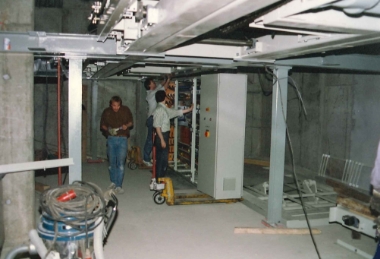 In addition to the manufacturing of controls for the automotive supplier industry, the division of conveying systems was established. This should reduce dependence on the automotive industry. 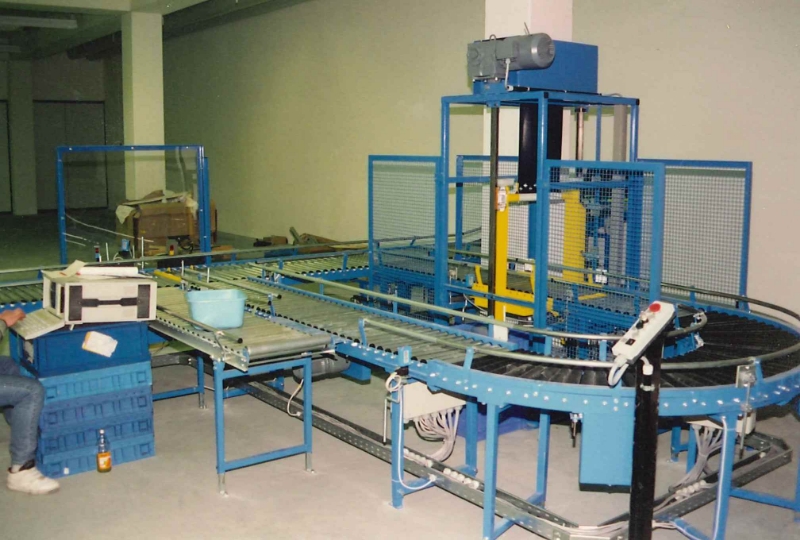 Conversion into a GmbH 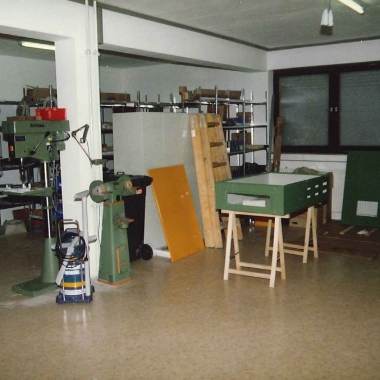 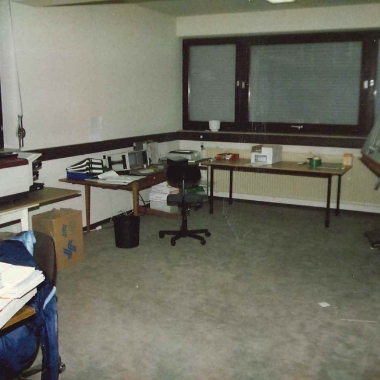 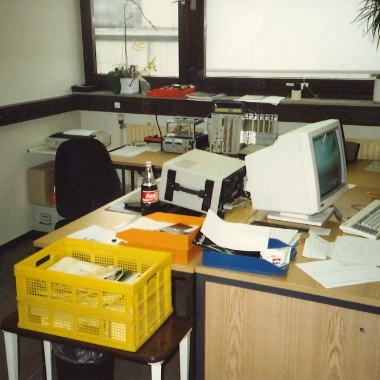 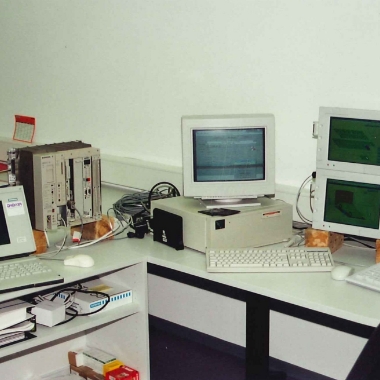 The company was founded on 2 May 1985 in Neuhausen / Filder by Uwe Drücker. The first workshop was set up in the Schloßstrasse.

Among the first customers:

In September, the first employee was hired.

In 1986, the first major foreign project was acquired for the battery factory Hoppecke in France

Followed by the move to the larger rooms in the Schurwaldstrasse.

In 1987, the first CAD system "Sigraph-ET" was purchased 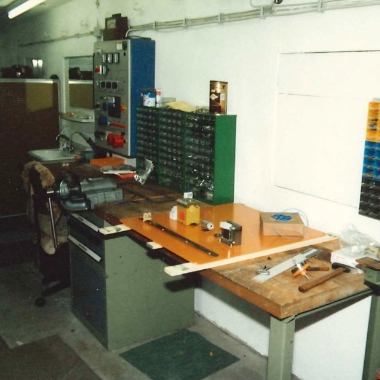 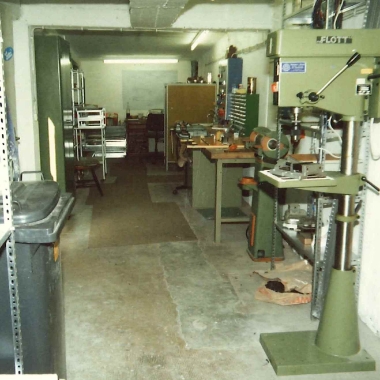 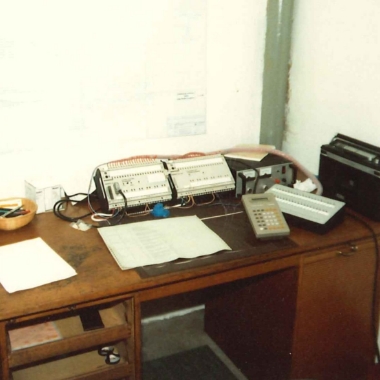 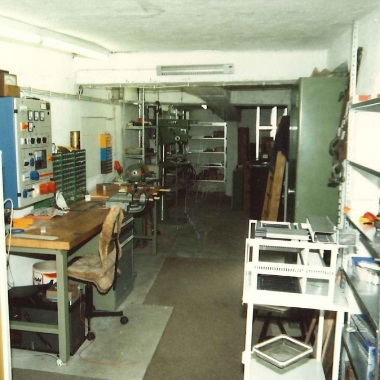 Since 1985, Drücker Steuerungssysteme Gmbh is a specialist in the development of industrial automation, control systems, and digital solutions.

In 2002, the company Drücker Steuerungssysteme Gmbh was awarded the main prize "VR-Innovationspreis 2002" (Innovation Award) of the Volks- und Raiffeisenbanken as the most innovative company in Baden-Württemberg.

Wir verwenden Cookies auf unserer Website, um Ihnen das bestmögliche Erlebnis zu bieten, da wir uns an Ihre Präferenzen und wiederholten Besuche orientieren. Indem Sie auf "akzeptieren" klicken, erklären Sie sich mit der Verwendung von ALLEN Cookies einverstanden.
Necessary always enabled
Necessary cookies are absolutely essential for the website to function properly. These cookies ensure basic functionalities and security features of the website, anonymously.
Functional
Functional cookies help to perform certain functionalities like sharing the content of the website on social media platforms, collect feedbacks, and other third-party features.
Performance
Performance cookies are used to understand and analyze the key performance indexes of the website which helps in delivering a better user experience for the visitors.
Analytics
Analytical cookies are used to understand how visitors interact with the website. These cookies help provide information on metrics the number of visitors, bounce rate, traffic source, etc.
Advertisement
Advertisement cookies are used to provide visitors with relevant ads and marketing campaigns. These cookies track visitors across websites and collect information to provide customized ads.
Others
Other uncategorized cookies are those that are being analyzed and have not been classified into a category as yet.
SAVE AND ACCEPT
Powered by